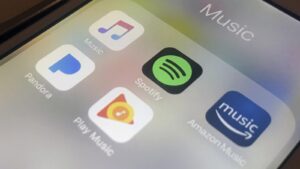 Apple music that launched in 2015 is a music streaming service that gives unlimited access to over 70 million songs.

If you have ever used Apple music before or any music streaming app in general you are familiar with the term “stream”. They are considered to be super important as artists get paid through them, but the performance of music is not only measured by the number of streams but other categories too such as purchases (recorded when the song or album is bought from the iTunes store), average daily listeners (the average number of daily listeners in the selected time frame), Shazams (recorded when the song is recognized by the Shazam app), etc…

Let’s talk about Apple Music streams: how are they counted, how much are artists paid per stream, how can one manage to get more plays, etc…

What Counts As a Stream on Apple Music?

Sometimes people get confused over what counts as a stream- do we need to play songs from a search on the app to make it count as a stream or do they need to play them directly from the playlists that we have made?

Well, we will define it for you:

For example, if you are playing the music from the album that you purchased from the iTunes Store, it does not count as a stream as the purchase was made directly for the artist.

How Much Do Artists Get Paid Per Stream?

Let’s get into the details: Apple pays an artist $0.00675 per stream, which makes around $6750 in total for every million. It has to be highlighted that a very popular app like Spotify pays out around $3,300 – $3,500 for every million streams which are pretty low in comparison to Apple Music.

If you are an artist that is looking for ways to promote their music and make a good amount of money at the same time, then you should invest your energy in Apple Music which pays better than Soundcloud, Spotify, Amazon, or Google Play.

How Can You Get More Streams On Apple Music?

Of course, some services will help in increasing your Apple Music streams, of they are JayNike, but we will teach you some tips that you can do by yourself to do so:

Create Playlists To Get More Streams

By creating and sharing playlists we do not mean creating a list full of your original singles but including those songs too that you like or get inspiration from.

This method will help you to share your new music and promote it as well as to connect to the audience that listens to the same artists on a personal level.

As a result, the number of streams will increase.

To explain it in the easiest way possible, Apple Connect is the social media part of the app. By using this section you might make new friends that are as passionate about music as you are. Using your artist page and connecting to the music lovers is considered to be one of the best ways of promoting your music on the app as they get interested in your persona as well as in the music you make.

Take Care of Your Cover Art

Always remember- before anybody listens to your music they see your cover art and there is a high chance of them not even clicking on your song if the picture they see is not appealing enough.

Nowadays designing is not that hard as there are hundreds if not thousands of websites online that will help you to create your art.

Do not forget to make it as “you” as possible!

Collaborate With Other Musicians

Collaboration is always a great idea even if it is with a new artist like yourself. Always go with the musicians that are in the same genre as you are. In the worst-case scenario, you will “exchange” your followers with each other which will still increase the number of your fans. In a better case, you both will get brand new followers which will result in increased streams too.

As you can see, there are several ways that will help you to get more streams on Apple Music. You should try each tip and plan your future strategy based on what works the best for you as a new artist.

Always be consistent with posting your music and being present on the platform. Engaging with your listeners will not only increase your streams but their interest in you as a musician.

Short Beard Styles to Try This Year
No Comments

How to Run Small Scale Business Successfully
No Comments

THE IMPACT OF TECHNOLOGY ON OUR LIVES
No Comments

Top 4 Reasons Why Project Management Certification Without Experience Is Also Worth It
February 20, 2021February 26, 2021 abbascey